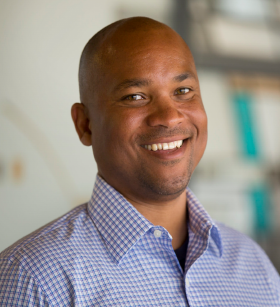 Odest Chadwicke Jenkins, Ph.D., is a Professor of Computer Science and Engineering and Associate Director of the Robotics Institute at the University of Michigan. Prof. Jenkins earned his B.S. in Computer Science and Mathematics at Alma College (1996), M.S. in Computer Science at Georgia Tech (1998), and Ph.D. in Computer Science at the University of Southern California (2003). He previously served on the faculty of Brown University in Computer Science (2004-15). His research addresses problems in interactive robotics and human-robot interaction, primarily focused on mobile manipulation, robot perception, and robot learning from demonstration. His research often intersects topics in computer vision, machine learning, and computer animation. Prof. Jenkins has been recognized as a Sloan Research Fellow and is a recipient of the Presidential Early Career Award for Scientists and Engineers (PECASE). His work has also been supported by Young Investigator awards from the Office of Naval Research (ONR), the Air Force Office of Scientific Research (AFOSR) and the National Science Foundation (NSF). Prof. Jenkins is currently serving as Editor-in-Chief for the ACM Transactions on Human- Robot Interaction. He is a Fellow of the American Association for the Advancement of Science and Association for the Advancement of Artificial Intelligence, and Senior Member of the Association for Computing Machinery and the Institute of Electrical and Electronics Engineers. He is an alumnus of the Defense Science Study Group (2018-19).