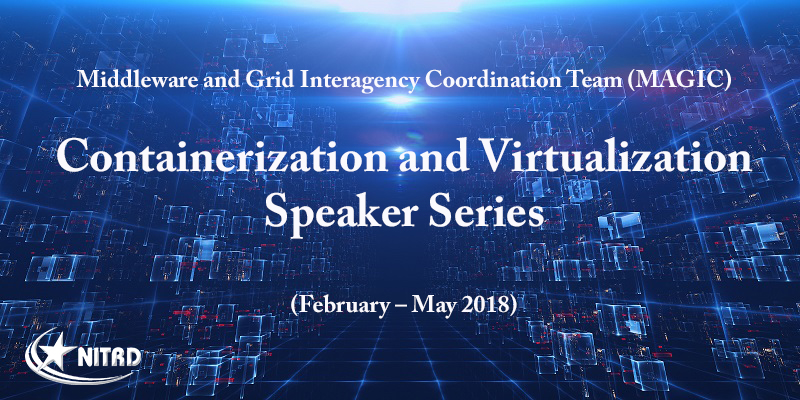 In the Spring of 2018, The Middleware and Grid Interagency Coordination Team (MAGIC) held a four-part speaker series to examine the impact of containerization and virtualization technologies on computing ecosystems.  The presentations and discussions focused on: (1) various packages that are in common use, (2) adoption and usage of container technologies in science communities, (3) adoption and deployment by resource providers, and (4) research and operational deployment challenges.

MAGIC is a public team under NITRD’s Large Scale Networking Interagency Working Group. The team is comprised of technical experts from academia, industry, and government, and is led by co-chairs, Richard Carlson, Department of Energy, and Vipin Chaudhary, National Science Foundation. They meet monthly to discuss current and future activities in the distributed computing environment.

On February 7, MAGIC kicked off the series with presentations on current containerization and virtualization technologies:

On March 7, MAGIC hosted presentations on the adoption and use of container technologies in science communities:

On April 4, MAGIC featured presentations on the adoption and deployment by resource providers:

On May 2, the speaker series concluded with discussions led by the following experts on the impact of containers on science, system development and standardization activities, the issues involved in building and deploying containers, security concerns, funding issues, and long-term solutions:

Meeting minutes are available for the February through May meetings in this MAGIC speaker series.

MAGIC holds public meetings on the first Wednesday of each month (12-2 pm ET).