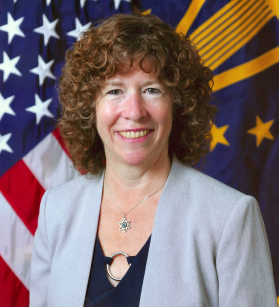 Ms. Barbara McQuiston is Deputy Chief Technology Officer for Science and Technology. In this role, she serves as the Under Secretary of Defense for Research and Engineering’s principal advisor on the entire Department of Defense (DoD) Science and Technology (S&T) portfolio. Ms. McQuiston leads the Department’s work to create DoD’s technology advantage, advocates for the Department’s S&T workforce and foundational laboratory infrastructure, oversees the DoD Federally Funded Research and Development Centers and University Affiliated Research Centers, advises on the Department’s critical technology protection policy, and oversees the health of the Defense technical industrial base and innovation communities for future technology.

Ms. McQuiston previously spent nearly a decade in Government service at the Defense Advanced Research Projects Agency (DARPA), where she served in the Defense Science Office, the Strategic Technology Office, and finally as Special Assistant to the Director for Energy. Throughout her tenure at DARPA, Ms. McQuiston directly supported the development of significant communications technologies and championed the development of alternative energy programs to reduce DoD’s dependency on imported fossil fuels. In 2010, she received the Office of Secretary of Defense Medal for Exceptional Public Service for her accomplishments in these leadership roles. In 2011, President Obama nominated Ms. McQuiston for the position of Assistant Secretary of Defense for Acquisition, though after her nomination became stalled in Congress, she requested it be removed.

In addition to her time at DARPA, Ms. McQuiston has more than 30 years of commercial experience, including executive management in high-technology companies and Government service. Her background includes strategic planning and development of new and innovative technologies for information, communications, biotechnology, medical, and environmental markets; negotiation for technology agreements; and technology transfer from private institutes, governments, and laboratories to the commercial sector. She has been deeply involved in venture fund technology investment and technical oversight for research, development, and commercial product efforts. Additionally, she advised capital management funds and negotiated and managed technology transfer agreements in both the public and private sector.