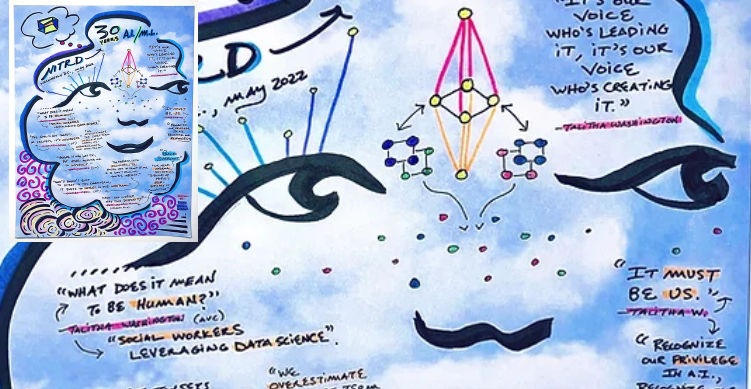 Arguably one of the greatest areas of progress in computing research over the last decade has been Artificial Intelligence and Machine Learning. The field has seen an AI/robotics revolution, and an explosion of new technologies, establishing itself as one of the underpinnings of society. Panel 3: AI/ML, moderated by Liz Bradley (University of Colorado Boulder) and starring panelists Charles Isbell (Georgia Tech), Chad Jenkins (UM), Talitha Washington (CAU), and Patti Ordóñez Franco (UPRRP) celebrated these federally funded advances and discussed the challenges these new innovations bring with them.

To kick things off Bradley set the panelists to the daunting task of identifying AI’s most important contribution to date. Rather than choose a single technology, which they all agreed were too many, each speculated on a societal contribution such as getting us to consider what makes us human and to focus on the divide and overlap between humans and technology, forcing changes and pushing interdisciplinary work forward, enabling access to a wealth of information and giving us a new way of thinking.

Isbell stressed the importance of continuing to invest in technologies that fundamentally change what we do and make life better for humans, whether it is popular at the time or not. Continuous federal funding through the cycles of popularity allows us to reap the benefits of these great contributions and enables the current technological revolution that we are experiencing. NITRD allows the innovation ecosystem to flourish and provides people with the opportunity to be inspired.

“I think of the federal government as the most awesome venture capitalists that we could think of.” – Chad Odest

Washington cautioned that we need to be cognizant of funding and providing these opportunities in a broad, inclusive manner in terms of race, accessibility, rural and impoverished communities and minority institutions. Earning a small cheer from the crowd, Washington emphasized “It’s not only a small pocket of those getting funding but really engaging all of society and all institutions”.

Continuing in that vein, Bradley asked panelists how to ensure that we are training the next generation of diverse talent for AI and R&D?

Similar to the panels before them, their solutions to establishing a diverse pipeline emphasized education and resource accessibility. Franco chose to highlight the disparity of funding and resources between institutions throughout the nation. She had to leave her post as a Professor at the University of Puerto Rico due to this disparity and stressed the importance of providing more money to minority serving institutions. She went on to explain the power that computing has to lift up poor communities and suggested we bring the education and resources to them by establishing informal education, such as community learning centers in poor neighborhoods, to build self-efficacy and prepare people for formal academic education.

The lack of diversity in the AI/ML community leads to “bad computing, bad engineering and bad technology.” Isbell brought up the example of a technology that transformed images from low to high resolution. The technology transformed every photo of a minority race, including Isbell (a black man), into a white person. It did not occur to anyone to test for this because those that were impacted weren’t in the room during the development phase. Isbell summed it up perfectly, “The problem of invisibility isn’t that you’re standing in front of me and I don’t see you, it’s that you’re not in front of me and I don’t notice your absence.” A diverse set of people need to be included in these conversations, as Washington said, “as intentional partners, not as an afterthought.”

During the Q&A portion, a CIFellow at New York University Francisco Castro, asked the panel how to achieve diversity in the pipeline when the academic computing research field is built on marginalizing and exclusive structures?

Washington answered, “We build our own.” Build new infrastructures and systems at the university, community and business level that incentivize and value diversity rather than citation numbers and graduation rates.

A hopeful lining the panelists all agreed upon was that technology development moves fast, whatever problems we are facing now, they won’t be the same ten years from now. As long as we acknowledge that these issues are real and continue to work towards solutions, things will continue to change and get better. You can check out the full panel recording on the CCC web page or on NITRD’s YouTube channel.

Be on the lookout for the next part in the series Panel 4: Privacy and Internet of Things!